My coworker Roxana Diaz Gomez was killed by a drunk driver in Brooklyn last 4th of July at the age of 27. She was fierce and beautiful, mean and funny, and her death rocked our entire world and spun all of us off of our axis. As the one-year anniversary of her passing approached this summer, I saw her everywhere. A girl in my coffee shop had her ponytail, a man in my coffee shop sounded just like her. This was all impossible, of course. Roxana would never have set foot in Kentucky. But grief is its own ghost and it followed me here, settled into tables at my shop and next to me on the couch while I watched TV.

Since July, its been easier, though I still think of her often, and saw signs of her in NYC, when I visited coworkers. I looked up to find myself by her church and went in and lit a candle. I do miss her.

Today, scrolling through Facebook, a NYC coworker had posted, “For a minute, I forgot it was Halloween, then I got on the downtown 1. Almost shat my pants…” over a picture of a clown so terrifying it would give Pennywise nightmares. “Eek!” and “Gross!” said a few people underneath. “OMG!!” Roxana wrote.

I blinked hard and swallowed. I made my eyes focus. “That isn’t Roxana,” I told my brain slowly. “It’s just a picture of her. A friend using a picture of her as their profile picture. Look at the name.” The name was Roxy Diaz. One part of my brain told me to look more closely. The other part was wondering if Roxana was going by Roxy. I looked again. Rosy. Rosy Diaz.

I clicked on Rosy Diaz to see who she had been before she was Roxana. Her mother. Rosy Diaz is Roxana’s mother. Buried in the back of her profile picture, the last dozen or so of which are all of Roxana, are two photos of a sweet woman I met briefly in the office once whose only daughter died way, way too young.

And in those profile pictures was a picture of Roxana and I with our coworker Cassandra, taken at our coworker Nancy Maria’s wedding. I don’t remember it being taken and I’ve never seen it before. In it, Roxana looks incredibly beautiful, and very happy. 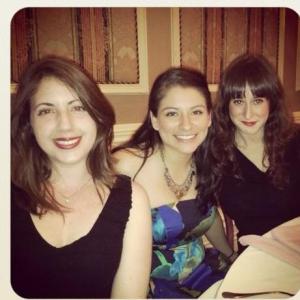 The veil between worlds is fucking thin today, darling, and don’t let anyone try to tell you any different.